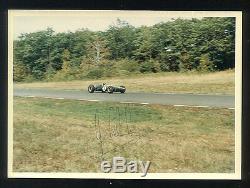 High quality Kodak Kodachrome photo was taken at the US Grand Prix at Watkins Glen & is one-of-a-kind. Clark did not end up winning this race BUT he did finish up the season by winning the'65 Championship for Team Lotus. It was arguably his greatest Formula One year ever. In 1968 Clark died tragically during a race in Hockenheimring, Germany.

The photo & signature are MINT! Pictured is Clark roaring by in his Lotus! Just a little background about the individual who took the photograph and obtained the signature, he was an avid Formula One racing fan & was able to take some outstanding action photos, mostly at Watkins Glen. He became friends with many of the great racers of the 1960's & would have them sign his images. Some of the drivers include Graham Hill, Mario Andretti, Bruce McLaren, Jackie Stewart, Jochen Rindt, Dan Gurney, Jack Barabham, John Surtees, Jo Bonnier just to name a few. Comes with an LOA from Sports Investments Inc, we GUARANTEE the signature will pass PSA/DNA or JSA Authentication! The item "1965 Jim Clark Signed Period Color Formula 1 Photo US Grand Prix World Champ d68" is in sale since Tuesday, May 20, 2014. This item is in the category "Sports Mem, Cards & Fan Shop\Autographs-Original\Racing-Formula 1". The seller is "sportsinvestments" and is located in Cincinnati, Ohio. This item can be shipped to United States.