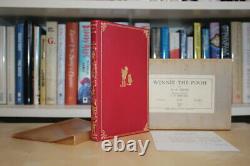 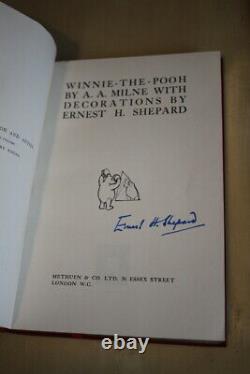 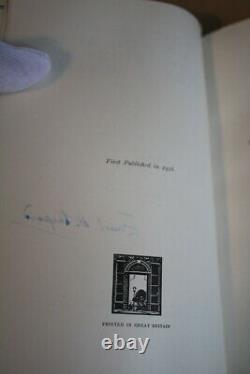 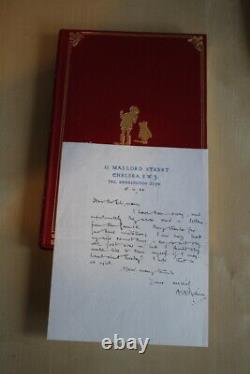 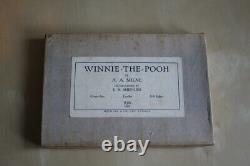 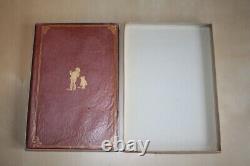 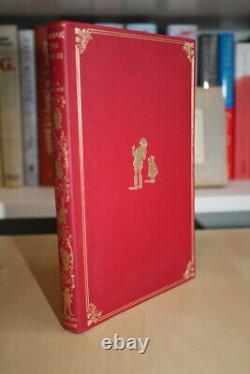 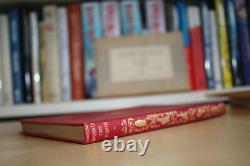 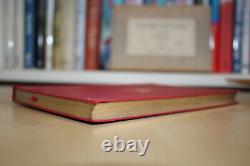 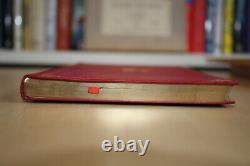 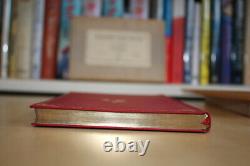 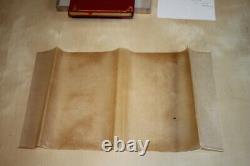 Shepard on the title page. In addition, a handwritten and signed letter by A. Milne anticipating the birth of Christoper Robin , the protagonist of the seminal Winnie-the-Pooh series. The condition of the book is absolutely fine, still in its original card board box and with the original glassine dust jacket. The print run was 3,000 copies divided into three colours of the leather binding: red, green, and blue. This is the red leather variant. One of 1,000 copies of which perhaps a handful exist in this beautiful condition and signed by the iconic illustrator Ernest Shepard! Condition of the book : a fine book with no issues whatsoever. Silk ribbon market present, all page block edges gilded. No rubbing to the leather biding. Spine like new with the gilding all vibrant and not rubbed out. The book has not been handled and has sat in its box for decades. The original box has usual signs of ageing, i.

Discolouration and a few ageing spots. The best example of this book we have encountered. Single page ALS, 4.5 x 6, on 11 Mallord Street, Chelsea letterhead. 20 and signed by A. Milne in full signature as A.

Center fold, else near fine. An incredible letter marking the first whisper of the catalyst for Milnes Winnie The Pooh series. Although Milne would not know it at the time, the birth of his son Christopher Robin in August of 1920 which would propel his imagination into the Hundred Acre Woods and the adventures of the honey loving bear with no brain, Winnie The Pooh. The letter offered here, dated April 15, 1920, references Daff A. Milnes wife and her pregnancy with Christopher Robin and is perhaps the earliest known reference to the protagonist of the most endeared childrens stories of all time. Milne named the character Winnie the Pooh after the teddy bear owned by his son, Christopher Milne, who originally called his stuffed bear Edward, but later named his toy bear after Winnie, a Canadian black bear he often saw at the London Zoo. His letter, written to Vincent Seligman, a person to whom Milne would develop a close friendship spanning over 30 years is shown in full below. At the time, Milnes wife would have been about 5 months pregnant. I hope that is all right. An absolute classic and landmark work of children literature.