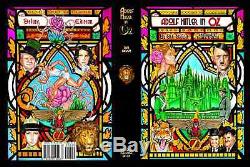 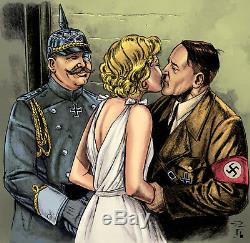 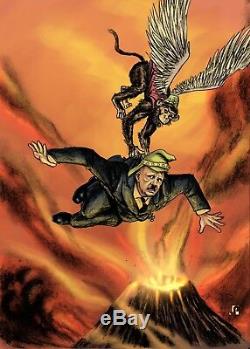 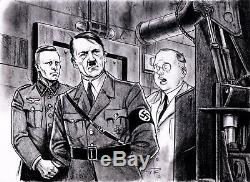 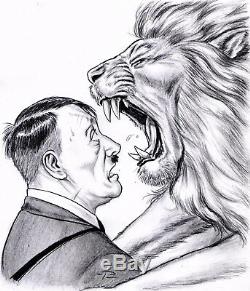 Signed and numbered Deluxe Limited Edition Hardcover. Founded On and Continuing the Famous Oz Stories by L. At the end of the Second World War, Adolf Hitler fakes his death and boards a machine intended to take him into the future. It lands him instead in the Land of Oz! Hitler's surprise is soon surpassed by his desire to take over, depose Ozma, and become Fuhrer of Oz! Along the way, he encounters Queen Ann of Oogaboo, the King of the Winged Monkeys, Stan and Ollie, General Jinjur and others who he attempts to recruit for his army. As Oz faces its greatest threat since the Nome and Phanfasm invasion, Ozma is determined to stay true to her principles of non-violence, culminating in the ultimate clash between fascism and pacifism! An authentic continuation of the original Oz series (taking place in 1945 on The Royal Timeline of Oz), Adolf Hitler in Oz is an exciting, thought-provoking, and hilarious story that new and long-time Oz fans will cherish!

This deluxe hardcover edition includes thirty-five full and half-page illustrations, plus 11 color plates, by renowned artist Patricio Carbajal, the bonus essay, "The Utopia of Oz, " and an exclusive stained-glass front and rear dust-jacket! Only 15 deluxe limited edition hardcovers were produced, of which only a few are remaining. Each book is signed and numbered by the late author and contain one additional illustration not found in the standard hardcover or paperback editions.

Please note: This book does NOT promote fascism, Nazism, or any racist, pernicious ideology. If you'd like to discuss it, feel free to message me. The item "Adolf Hitler in Oz Rare Limited Deluxe Edition Signed & Numbered Hardcover Baum" is in sale since Wednesday, September 6, 2017. This item is in the category "Books\Fiction & Literature".