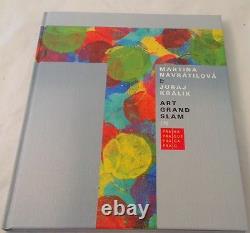 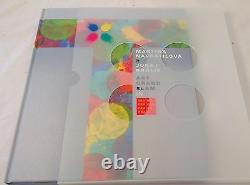 Signed by artist + navratilova. Czech-born tennis star Martina Navratilova will be opening an exhibition named Art Grand Slam in Prague next week. The project, initiated by Slovak artist Juraj Kralik, combines tennis and art and will be on show at Prague's Congress Centre.

Mr Kralik paints pictures onto which Martina Navratilova then creates patterns by hitting them with paint-covered tennis balls. From a newspaper article written at the time. In its crudest and, perhaps, most joyful expression, it involves the player hitting paint-covered tennis balls at a canvas, usually marked with court lines and prepared to resemble a playing surface: clay, grass or artificial. "It's just the greatest fun, " says Navratilova, who is in Sydney this week to organise an exhibition of what has been named Art Grand Slam. Some sessions end up with everything, balls, racquets, clothing, me - just covered in paint.

It might be imagined that the "paintball" results would resemble the Nine Network cricket graphics that use coloured balls to show where a bowler's deliveries are pitched and how they are handled by the batsman. Rather, they prove remarkably colourful, imaginative and diverse, especially when other features, such as footprints, scuff marks and three-dimensional accessories, including nets, balls and shirts, are incorporated.

Art Grand Slam was the brainchild of the artist Juraj Kralik, who as a teen growing up in the Soviet-controlled Czechoslovakia followed from afar the exploits of a national hero who had sought asylum in the United States and conquered the sporting world. This item is in the category "Books, Comics & Magazines\Books". The seller is "goldcoast_4215" and is located in this country: AU.