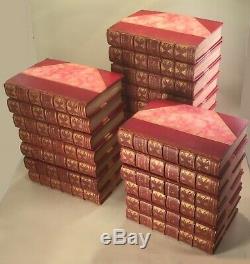 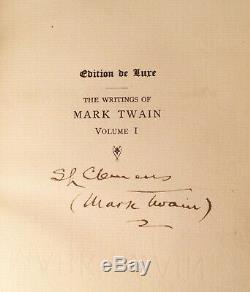 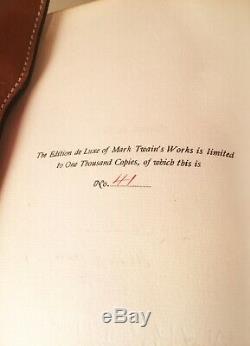 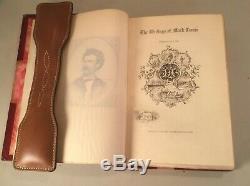 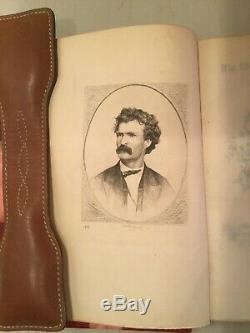 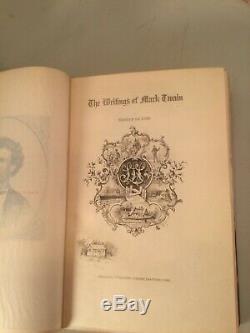 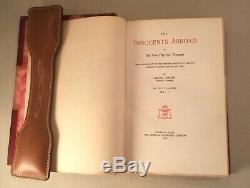 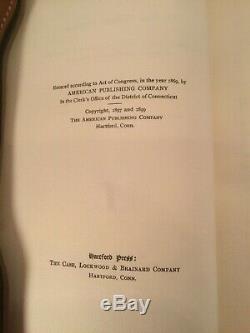 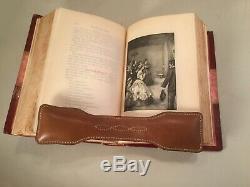 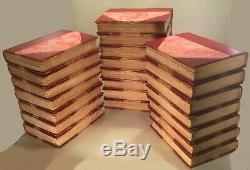 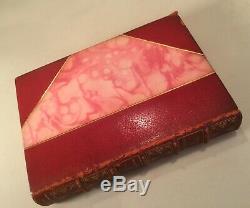 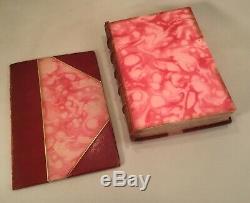 #41 of EDITION DE LUXE. THE WRITINGS OF MARK TWAIN. On offer is a rare, hardcover, limited edition, leather-and-marble board-bound 1899 set of the collected writings of Mark Twain signed by the author as "SL Clemens (Mark Twain)". The set on offer is identified in red ink on the limitation page as No.

Twenty-two of the original twenty-five volumes are included Volumes IX, XII, and XIII are missing. INTERESTING FEATURES FOR THE COLLECTOR.

This signature anomaly and the edition characteristics offer several interesting features for the collector. In order to clarify those features, it's helpful to take a brief look at the so-called Uniform Editions of Twain's works by Harper & Brothers of which the set on offer is an example. I'm not the scholar who did the original research in the Twain /Harper archives to develop this data and so offer it only for the purposes of general information as I cannot personally guarantee its 100% accuracy. It does, however, seem to me to be generally correct. THE 1899 UNIFORM EDITIONS OF HARPER & BROTHERS.

The 1899 Uniform Editions originated in the desire of Clemens - who, as Mark Twain, was one of the most prolific and popular writers of the second half of the nineteenth century - to collect his writings, whatever their original mode of publication, into a standardized format. He also wanted to realize the additional personal income such a collection would generate. This led ultimately to an arrangement with prestigious U. Publisher Harper & Brothers that, after all the negotiations needed to acquire reprint rights from various book and magazine publishers, as well as to incorporate the participation of The American Publishing Company of Hartford (an earlier publisher of Twain's works), resulted initially in the issuance of several editions through the American Publishing Company, as follows.

Each set was printed on paper watermarked "Clemens" and contained a series title page in each volume designed by Tiffany and Company and engraved by W. (1899) and Japan Edition (1899) - Together, limited to 1000 sets (although limitation page indicates each was originally intended to contain 1000 copies, research has revealed that evidently only about a 1000 in all were published between the two editions), 8.5 x 6.0. Similar to Autograph Edition save that, as typically delivered by the publisher, was not signed by the author, and was printed on paper watermarked "Mark Twain". Author's De Luxe Edition. (1899) released through the English firm of Chatto and Windus - Limited to 600 copies. Edition de Luxe save that each copy was autographed by Clemens on the limitation page. (1899) - Like the U. Edition de Luxe save that the limitation notice gives no total number for the edition. (1899) - Unnumbered edition with no limitations page. Each of these editions was published in twenty-two volumes, with the addition in 1903 and 1907 of a total of three additional volumes to complete the previously published set by incorporating further work of Twain's. All of these editions, save for the Popular Edition, seem to have been offered in a variety of leather, leather-and-board, board, fabric, etc. This leads to variations in appearance and content that make it difficult to say that any set in a particular edition "always" has or does not have this or that feature. At the same time, the sets in each edition shared certain commonalities. FEATURES COMMON TO THE EDITION DE LUXE.

Special series and edition title page monogram designed by Tiffany and Company (Tiffany had decorated Twain's Hartford home) and engraved by W. Bicknell appears in each volume of the set. Engraved portrait frontispiece of Mark Twain at different ages in all volumes save the second of two-volume titles (these had story illustrations for frontispieces). In THE GILDED AGE, the frontispiece features both Twain and Charles Dudley Warner, the co-author. In THE PRINCE AND THE PAUPER, the frontispiece features both Twain and two of his young daughters. Illustrators included: Peter Newell, T. West Clinedinst, Dan Beard, Thomas Fogarty, Fred'k Dielman, C. Illustrations protected by tissue guards. Volume XX includes a map of Paris by Twain. Top edges of pages gilt; side and bottom edges of pages deckled or ragged. Available in cloth and leather bindings, with each volume numbered on the spine. The binding of the set on offer is of attractive red-and-white marbled boards bound with red leather spines and corners. There are matching red-and-white marbled end papers. The top page edges are gilt; those on the side and bottom are rough cut. The spines have five raised bands that divide the series and title information into six panels. The top panel has a decorative motif stamped in gilt; the second panel has the series identification "Works of Mark Twain"; the third panel has the same decorative motif as the first; the fourth panel has stamped in gilt the name of the individual title contained within - if the title is found in more than one volume, the volume number is also given here, also stamped in gilt; the fifth and sixth panels have the same decorative motif as the first; and the sixth panel displays "De Luxe Edition" at the bottom, stamped in gilt. At this remove I cannot guarantee that the binding of the set on offer is original as offered by the publisher, but it appears to be contemporary in style.

Each volume in this De Luxe Edition of 1899 adheres to the same internal organization, as follows. Series Identification Page Edition de Luxe / The Writings of MARK TWAIN / Series Volume Number / Decorative ornament. Reverse of above: The Edition de Luxe of Mark Twain's Works is limited to One Thousand Copies. Of which this is No.

Full-page Twain-portrait frontispiece facing Tiffany designed series title page The Writings of Mark Twain / Decorative ornamentation featuring SLC monogram in center surrounded by visuals with meaning for Clemens [at bottom left is log cabin in which he was born] / American Publishing Company, Hartford Conn. Individual book title page with Title / Subtitle / Author / Number of volumes in title if more than one / Number of this title / Decorative ornament / Hartford Conn / The American Publishing Company / 1899. Dedication (not all titles have dedications).

Some titles have prefaces or other text before or after the body text. CONDITION OF THE SET ON OFFER. The worst damage is that the cover of Volume I of the series - Innocents Abroad , Volume I of II - is completely detached from the book block - see the photographs. The set has various condition issues common to most, perhaps all, leather or part-leather sets in the 1899 Uniform Editions , as follows.

The spines are faded (not uniformly) to a brownish-red. The raised bands on the spine show signs of wear. Some of the gilt type on the spines is worn.

The leather strips adjacent to the spine, front and back, frequently show abrasion. Some of the gilt stringing on the cover is worn. Many of the corners are bumped. The bottom and side edges of the boards show abrasion. The endpapers facing the leather binding overlap show corresponding fading - See photograph of detached cover.

The book blocks are firm, but several of the covers require strengthening. It should also be noted that bindery errors in Volume XXII (How To Tell A Story and Other Essays) resulted in (a) a minor fold in the lower right corner of pages iii and v(in v, there's a 1/8 notch above the fold) and (b) a failure to bind securely the signature containing pages 23-26 (signature was tucked so securely within the other pages that I discovered it only by accident). The good news is that the interior of the set is in amazingly good condition - clean and clearly rarely handled. Many volumes contain at least some uncut pages. Some of the paper edges display faint aging.

Please review the photographs as they are of the actual set on offer and form part of the item description. THE AUTHOR AUTOGRAPH IN THE SET ON OFFER. The autograph was represented to me as genuine by a well-known, respected antiquarian bookseller thirty-odd years ago. The autograph is, however, definitely not printed, displays the same handwriting characteristics, and does follow the usual Clemens signature pattern in the same ink he used to sign other titles in various Uniform Editions - see the photographs. I have tried to describe and picture the set accurately.

At the same time, I realize that individual collectors have specific concerns that I may not have addressed. If you have questions, would like additional photographs, would like a list of the illustrations included, want a high-res image of the signature, etc. 6" x 8.5" - individual volumes have different depths.

Page numbers for the volumes included are as follows. Here's a chance to acquire at a fair price a rare, nearly complete, autographed set of a Uniform Edition of the Works of the writer many feel is the greatest the U. The item "AUTOGRAPHED 22 VOL SET WRITINGS OF MARK TWAIN / DELUXE EDITION 1899" is in sale since Tuesday, October 22, 2019.

This item is in the category "Books\Antiquarian & Collectible". The seller is "basilblue" and is located in Creston, North Carolina. This item can be shipped to United States.