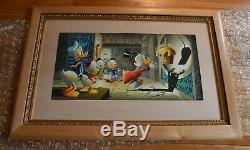 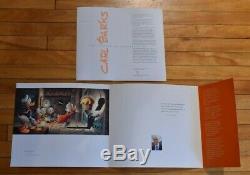 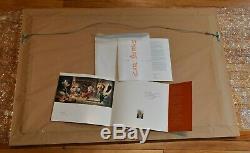 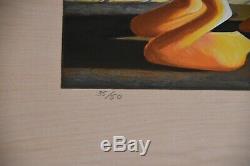 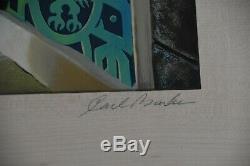 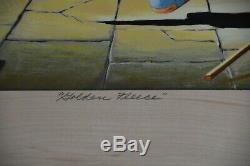 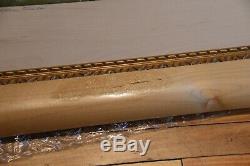 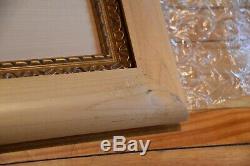 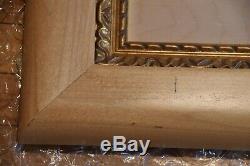 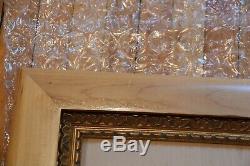 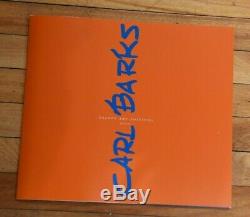 I use some terms such as serigraph, lithograph, artist proof, etc. FRAMED BY DISNEY ART EDITIONS. THE FRAME HAS A FEW FLAWS (NEARLY ALL OF THEM DO DUE TO THE RUSHED PRODUCTION PROCESS): PLEASE SEE THE PICS, THERE IS WHAT APPEARS TO BE RESIN OR ROUGH SEALER RESIDUE IN SEVERAL PLACES AS WELL AS A FEW DISCOLORATIONS AND SMALL SCRATCHES. NONE OF THIS WILL DISTRACT FROM THE PIECE OR BE IMMEDIATELY NOTICABLE FROM A CASUAL GLANCE, BUT UPON CLOSER INSPECTION THESE FLAWS IN THE FRAME ONLY, THE ART ITSELF IS FLAWLESS! AGAIN, THE PRINT ITSELF IS PRISTINE/NEAR MINT/FLAWLESS!

Disney Art Editions have only produced 3 serigraphs from Carl Barks oil paintings. The serigraphs were made at the Moross Studios in Los Angeles, California with the collaboration of Carl Barks. The DELUXE serigraph is printed from hand-done color separations incorporating 96 handmixed and custom colors printed over several layers on a sheet of maple wood.

Actual image size is 12" x 24" approx. It is the only oil painting he made in this odd size. The piece really looks like an oil painting with different layers of color clearly visible. The "GOLDEN FLEECE" is the first Carl Barks serigraph produced by Disney, and was released for sale in December, 1993. It was produced from an original oil painting which Carl Barks completed in May 1972.

Golden Fleece recreates a memorable moment from the 1956 comic "The Golden Fleecing" (Uncle Scrooge #12). Scrooge approaches the fleece unaware that he is inviting an attack from evil Larkies. The GOLDEN FLEECE serigraph was released in 3 different editions; regular, remarqued and deluxe. The 3 editions were produced in the following numbers.

AND THIS IS ONE OF THOSE! IN 1998 MORE THAN 20 YEARS AGO! The promotion folder and CERTIFICATE OF AUTHENTICITY for the GOLDEN FLEECE is of course included and kept in an envelope on the back of the piece. It is possible to open the folder, on the left inside is the image and on the right is a flap with a short description and bio on Carl Barks and the GOLDEN FLEECE. The CERTIFICATE OF AUTHENTICITY is a separate sheet within (see pics).

PLEASE VIEW MY OTHER AUCTIONS FOR OTHER STUNNING CARL BARKS COLLECTIBLES! This is an ORIGINAL SERIGRAPH, not a color copy or cheap print. All funds must be in US DOLLARS. HOWEVER - I KNOW THERE ARE A LOT OF BARKS COLLECTORS IN EUROPE... I SO HAPPEN TO TRAVEL TO EUROPE IN THE FIRST WEEK OF SEPTEMBER 2019. Lithography - Printing technique using a planographic process in which prints are pulled on a special press from a flat stone or metal surface that has been chemically sensitized so that ink sticks only to the design areas and is repelled by the non-image areas. Lithography was invented in 1798 in Germany by Alois Senefelder. Serigraphy (Silk-screen) - A printing technique that makes use of a squeegee to force ink directly onto a piece of paper or canvas through a stencil creating an image on a screen of silk or other fine fabric with an impermeable substance. Serigraphy differs from most other printing in that its color areas are paint films rather than printing ink stains. Artist's Proof - Print intended for the artist's personal use. It is common practice to reserve approximately ten percent of an edition as artist's proofs, although this figure can be higher. The artist's proof is sometimes referred to by it's French épreuve d'artist abbreviation E. Artist's proofs can be distinguished by the abbreviation AP or E. Commonly on the lower left of the work.

Print retained by the printer as a reference. Artists often sign these prints as a gesture of appreciation. Hors d'Commerce Proof - Print identical to the edition print intended to be used as samples to show to dealers and galleries. Hors d'Commerce abbreviated to H. Proofs may or may not be signed by the artist.

The item "CARL BARKS Disney GOLDEN FLEECE Serigraph DELUXE Signed & #35/50 FRAMED Litho" is in sale since Monday, June 3, 2019. This item is in the category "Collectibles\Disneyana\Contemporary (1968-Now)\Posters, Prints & Lithos". The seller is "liebundauchteuer" and is located in Minneapolis, Minnesota. This item can be shipped worldwide.