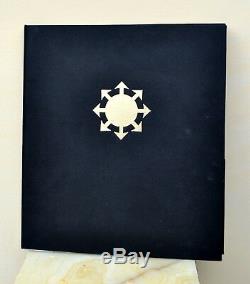 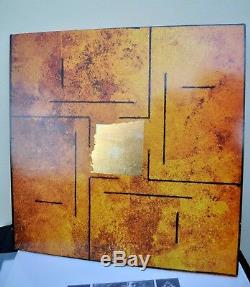 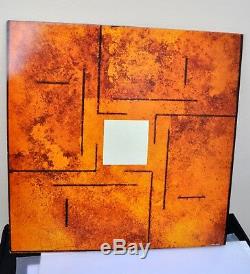 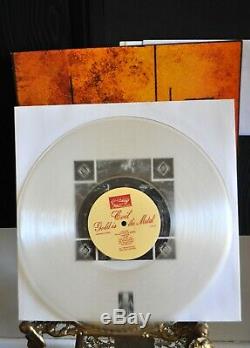 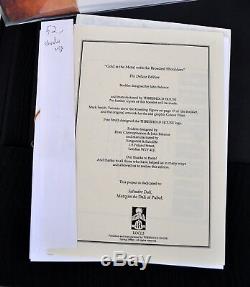 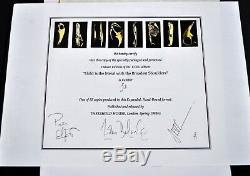 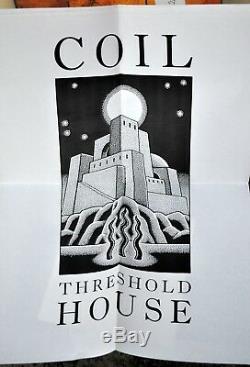 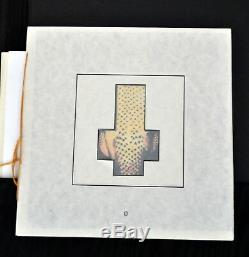 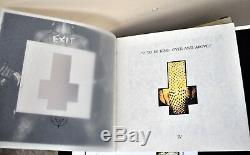 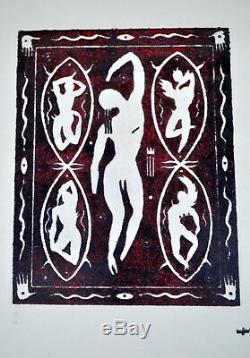 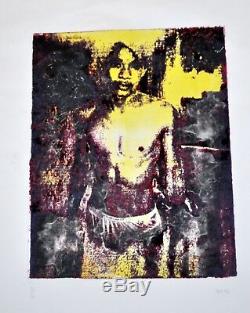 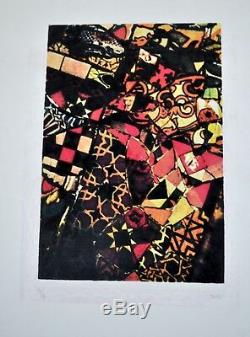 This was released in 1988, as a very limited deluxe folder edition, of 55 copies. Measures 36cm by 40cm and looks like an oversized hardcover book with gold leaf print to front of the cover. The record sleeve features blank squares (instead of the printed ones on other editions), with the front square having been hand painted with gold paint, while the back square has been left blank. The album was pressed on limited edition clear vinyl. Limited edition 7" of the "The Wheel/The Wheal pressed on black vinyl.

In addition, there is a. Numbered certificate signed by Stephen Thrower, Peter Christopherson, John Balance (and Otto Avery - also Balance); a. A booklet of artwork and collage designed by John Balance; two large folded COIL.

Folder/sleeve, with a wax seal, containing three A3 sized numbered color prints. This copy is numbered #52, and has a note, that it was originally sent to Charlie Ooze (ie - Charles Powne of Soleilmoon). This is a lavishly produced, and very rare and important COIL release. Do not miss out on this rare opportunity. The Last Rites Of Spring.

Photography By [Photo Of Coil]. The album is pressed on limited edition black or clear vinyl (both black and clear vinyl copies exist).

Plastic folder/sleeve, with wax seal containing three A3 sized numbered color prints. A manufacturing defect caused many of the art prints in the box sets to stick together, thus causing some relatively minor loss of color when they were pulled apart. From the liner notes: This release is not the follow-up to Horse Rotorvator... But a completely separate package - a stopgap and a breathing space - the space between two twins. Presented here are thoroughbreds that escaped the Horse Rotorvator - discarded shards, distortions, disappointments, scrambled and disassembled stages.

Check out my other items. I have other COIL and COIL-related rarities, which I have currently listed, and will be listing.

I also have the original CD release of Visitors (which has also been signed), as well as Art Editions of the Wounded Galaxies.... CD available, as well as other artworks, prints & rare releases by Ossian Brown, Cyclobe & COIL. I also have other rare limited edition prints available by Current 93, including the sister print to this one: "I Arose As Aleph, The Speller, The Killer", as well as numerous posters, and other signed prints.

I also have a number of prints by Cyclobe, Nurse With Wound, COIL, etc. And also prints released by Three Hands Press, including Daniel Schulke's "The Theriomorph", a larger-scale letterpress print, and also have a number of the last remaining high quality prints of Andrew Chumbley's. I also have numerous rare & out of print book titles, currently listed, with more to come.

Be sure to add me to your favourites list. And Check out my other items. I will be listing many other Rare & hard-to-find books, artworks and many other items of interest. The item "Coil Gold Is The Metal Deluxe Box Ed 1/55 Signed John Balance with Prints Book COA" is in sale since Saturday, February 9, 2019.

This item is in the category "Music\Records". The seller is "reix718" and is located in Belfield, NSW. This item can be shipped worldwide.