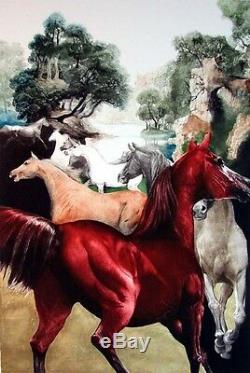 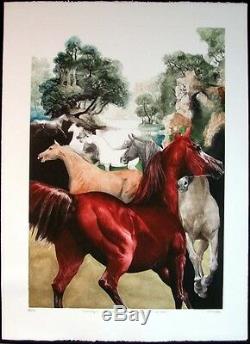 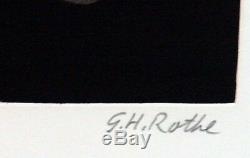 Rothe was renowned as master of the mezzotint. She combines technical mastery with inspired imagination. Rothe studied in art history, human anatomy, gold smithing and extensive drawing culminated in her discovery of the mezzotint technique Her years of research and constant practice supplied the perfect medium for her vast repertoire of images. 1935- Born in Poland, and despite growing up amidst a world at war, Rothe s work in the arduous and difficult medium of Mezzotint symbolizes all the joy and passion of life. After studying painting and art history at Pforzhiem Academy of Design in 1956, Rothe didn't t produce her first Mezzotint until after moving to New York in 1972.

A proven master at the painstaking process of Mezzotint that requires sometimes 500 hours and more to produce a single image Rothe s work enhances private, public, and corporate collections all over the world. Rothe was the renowned as master of the mezzotint and as one of the world's greatest living artists. She was born in 1935 in Beuthen, Germany (ceded to Poland in 1945) and her studies in art history, human anatomy, goldsmithing and extensive drawing culminated in her discovery of the mezzotint technique. Impelled to revive this most difficult technique of printmaking led to an invention in 1972 never accomplished before in mezzotint: transparency, and she found it.

Her years of research and constant practice supplied the perfect medium for her vast repertoire of images. Ludwig von Siegen, the first mezzotint engraver would have been impressed. He wrote in 1642, There is no living artist who could guess how this engraving has been executed. Yet more impressive is G. Rothe's zeal; she completed over 70,000 mezzotints.

I carve my images into copperplates directly with a diamond. Then I pit the surface with a chisel-like tool called a rocker.

When the ground work is done, I use a steel burnisher quite extensively to shape my images as one would do in a fine barr relief but working in reverse. After I pull a proof print from the copperplate, I cover the surface anew with fine pitted holes using the rocker, eliminating thought in action, practicing Karma Yoga.

The experience of layering images and the x-ray shapes is guided by the mind's eye. I feel but cannot see the picture underneath the second layer of pits.

As the essence of life is an unknown force, I see when I don't look. ROTHE - MASTER OF THE MEZZOTINT. 1935 Born in Beuthen / East Germany 1944 Refugee 1947 New settlement in Wiedenbrück, West Germany 1954 Goldsmith apprenticeship 1956 Studies painting and art history at Pforzheim Academy of Design 1958 Marriage with Prof.

Rothe 1968 Awarded with the Villa-Romana-Prize, Resides an works for a year in Florence, Italy 1969 Studies in Europe 1970 Studies in South America 1971 Emigates to New YorkCity 1972 Completes first mezzotints 1973 Designing jewelry for Tiffany´s 1975 Painting in Mexico 1978 Contract with Hammer Galleries in New York 1978 Listed in Who´s Who in American Art and Who´s who in America 1979 Builds studio in Carmel/California 1986 New studios in Brooklyn and Manhattan Graffites 1990 Oversized pastell paintings 1992 G. Rothe Galleries in Carmel 1993 Frescos at Seastone 1994 Studies in France and Italy 1997 Retrospective 25 Years Mezzotint-G. Within the continental United States. If outside the continental USA.

Add a map to your own listings. The item "G H Rothe Danby's Enchanted Island Revisited Deluxe gold Hand Signed horse" is in sale since Monday, November 21, 2011. This item is in the category "Art\Art Prints". The seller is "american_design_ltd" and is located in Aurora, Colorado.