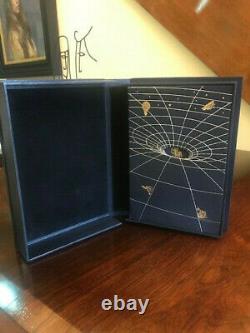 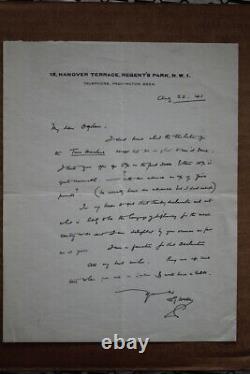 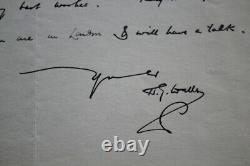 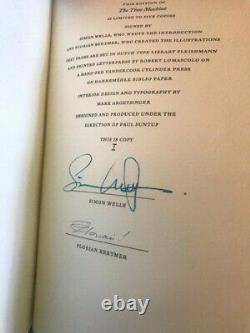 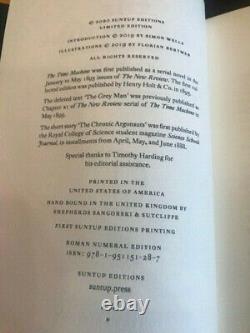 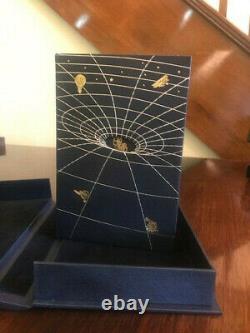 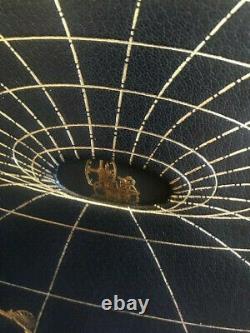 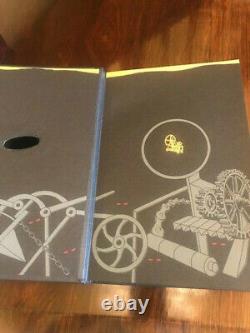 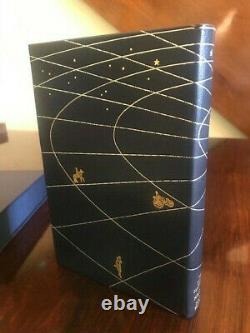 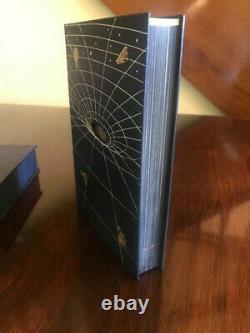 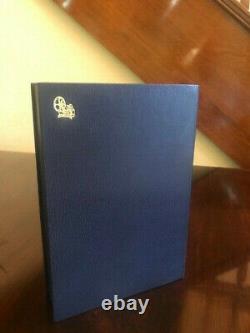 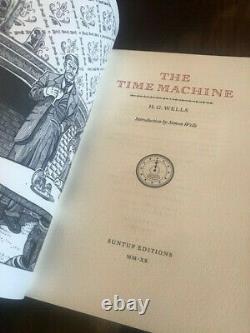 Herbert George Wells (2020) The Time Machine , US deluxe limited edition , published by Suntup Press. This is one of only five Roman Numeral editions, signed by Simon Wells, the authors great grandson and director of the Time Machine (2002) film adaptation , and signed by the artist Florian Bertmer. The book is a work of art as specified below. We include an original handwritten and signed H. Wells letter , fittingly with The Time Machine content (see below for details).

1 The letter and its content. Wells, 7 inch x 9 inch, one page, on his 13, Hanover Terrace, Regents Park, N. Handwritten letter is to British writer and linguist Charles Kay Ogden , in part: I dont know about the translation of The Time Machine, except that Ill be glad to see it done. I think your offer of 5% on the first 3000 & then 10% is quite reasonable?

With an advance on a/c of five pounds? (We usually have an advance but I dont insist). Ring me up some time when you are in London & well have a talk.

In near fine condition, with usual letter folds. Charles Kay Ogden (1889 1957) was an English philosopher, writer, and linguistic psychologist, who is now mostly remembered as the inventor and propagator of Basic English, an international auxiliary language and aid for teaching English as a second language. Essentially a simplified subset of regular English, the concept was first presented in Ogdens 1930 book Basic English: A General Introduction with Rules and Grammar. Wells adopted the idea of Basic English in his 1933 science fiction work The Shape of Things to Come. He gave his name to the Sankey Declaration of the Rights of Man (1940), the product of the Sankey Committee, which was set up in 1940 by the.

And the National Peace Council, and which Sankey chaired. The most active member of the committee was H.

Wells, who prepared the draft that the Declaration was based on. It identified eleven fundamental human rights: right to life, protection of minors, duty to the community, right to knowledge, freedom of thought and worship, right to work, right to personal property, freedom of movement, personal liberty, freedom from violence, and right of law making.

The Sankey Declaration was widely publicized by its sponsors at the time, but has since been largely forgotten, having been overtaken by the Universal Declaration of Human Rights adopted by the United Nations General Assembly in 1948. 2 Production details of the Suntup limited edition book according to the publisher. 6 x 9 trim size. Hand bound by Shepherds Sangorski & Sutcliffe in London, U. Bound in midnight blue goatskin with a vortex on the front board which reaches around to the back.

Printed letterpress on Hahnemühle Biblio mold-made paper. Two color printing on title page. Housed in a drop back box in matching leather with hand tooling in white gold. Limited to no more than 5 copies for sale. Condition of the Suntup limited edition book : fine with the original packaging.

Considered the greatest science-fiction novel of all time. Is a seminal moment in the history of English literature.

A dazzling display of new thought that has been endlessly copied since its release in 1895, its title alone a phrase coined by Wells as a device for traveling backwards or forwards through time has become part of the cultural lexicon. When an English Scientist, known only as The Time Traveller, invents a machine that can travel through time, he finds himself in a distant future inhabited by a mellow race of humans called the Eloi.

The Time Traveller will soon discover, however, that they are not the only race left on Earth. Remains one of the most important novels of the 19.

Will mark the first in a three-book set of H. Originality was Wellss calling card. The authors ability to, as historian John Higgs notes create wholly original stories out of thin air culminated in a three-year span in which he produced three of his most influential works; what Wells referred to as scientific romance novels. The War of the Worlds.

Are editions uniquely crafted and designed to breathe new life into some of the greatest stories ever told. Additionally, each book includes special curated bonus material to create a truly unique set of these beloved novels. Features an exclusive introduction by Simon Wells, great-grandson of H.

The edition includes The Chronic Argonauts, an 1888 short story by H. Wells which the author refers to as, the original draft of what became. Also included is the long-lost eleventh chapter, The Grey Man, published during the novels serialization in the January to May issues of.

Excised from the first book edition published later that year. Wells, most notable science fiction works include. The Time Machine (1895), The Island of Doctor Moreau (1896), The Invisible Man (1897), The War of the Worlds (1898).

And the military science fiction. The War in the Air (1907). A renowned futurist and visionary, Wells foresaw the advent of aircraft, tanks, space travel, nuclear weapons, satellite television and something resembling the World Wide Web. Britain's most famous science fiction writer of all time, and - togther with Jules Verne - undoubtedly the father of modern science fiction.

Wells'The Time Machine', Suntup deluxe limited edition + signed letter" is in sale since Sunday, October 11, 2020. This item is in the category "Books, Comics & Magazines\Antiquarian & Collectable". The seller is "firstandfine" and is located in Birmingham.