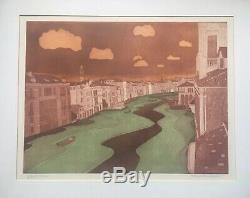 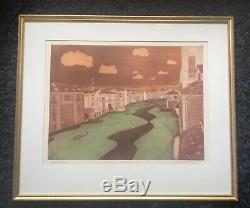 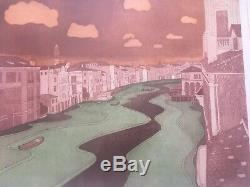 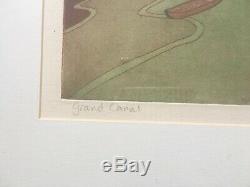 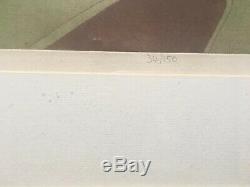 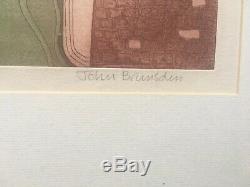 JOHN BRUNSDON RE - Grand Canal, Venice. Large aquatint etching from a series of commissioned works on Venice from the late 1970s by the highly sought after John Brunsdon RE. This one is titled Grand Canal and is in remarkable striking and contrasting colours.

Photographed in its gilt frame and mount (occasional light wear), the print appears to be in excellent condition, possibly some light but even time toning around the margins up the mount, hard to tell, but not apparent in any case in its frame and mount. Born in Cheltenham, Gloucestershire, John Brunsdon is known worldwide for his distinctive and colourful landscape etchings and was one of Britains most recognised printmakers. He studied at Cheltenham College of Art from 1949-53 and the Royal College of Art from 1955-58. Taught by some of the finest British printmakers including Julian Trevelyan, Edwin Ladell and Edward Bawden. He was a founder member of the Printmakers Council in 1965 with Valerie Thornton and Michael Rothenstein.

His first one man exhibition in Britain was in 1967 at the Curwen Gallery and in the USA, 1975. His work is represented in the Arts council, Tate Gallery, The British Council, V&A, MOMA, New York, Scottish Museum of Modern Art and many other public collections. The item "JOHN BRUNSDON RE 1933-2014 Large Limited Edition ETCHING Grand Canal ed 34/150" is in sale since Friday, July 5, 2019. This item is in the category "Art\Art Prints". The seller is "fortheloveofart-uk" and is located in slough, Buckinghamshire.