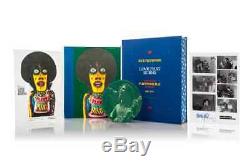 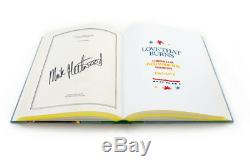 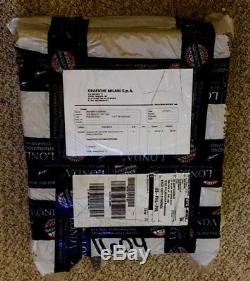 A Chronicle of Fleetwood Mac. BRAND NEW, MINT, SEALED IN ORIGINAL PUBLISHERS WRAPPERS. Included with the DELUXE EDITION is. An embroidered appliqué and two art prints.

Also comes with a 7 vinyl record featuring the piece Fleetwood Mac, from which the band took its name. The photos of the book shown here are stock photos. In 1967 Fleetwood Mac debuted at the Windsor Blues and Jazz Festival. 50 years later one of its founding members Mick Fleetwood documents the rocky beginnings of a band that emerged from what is now referred to as the British Blues Boom.

This official limited edition chronicle. LOVE THAT BURNS, contains over 400 rare images and an original manuscript of over 20,000 words with exclusive contributions from early Fleetwood Mac band members including John and Christine McVie, Jeremy Spencer and the legendary Peter Green. Contains original manuscript from Mick Fleetwood recounting his childhood, early bands, Fleetwood Mac's debut performance, first international tours, live gig antics, playing with blues legends at Chess Studios, the genius of Peter Green and the many talented members that formed Fleetwood Mac in the years before 1975. And is narrated with more than 20,000 words.

LOVE THAT BURNS features images from the Mick Fleetwood archives and various contributors from friends of the band including rare unpublished images and unseen archival material. Top photographers include Clive Arrowsmith, the iconic Henry Diltz, Bruno Ducourant, Bob Gruen, Jeff Lowenthal, Barry Plummer, Michael Putland, the inimitable Dominique Tarle, Fillmore Easts Amalie Rothschild, and Daniel Sullivan. The book also features illustrations by Jeremy Spencer and selected memorabilia. Mick Fleetwood is a self-taught drummer and a founding member of one of the most successful bands of the last 50 years, Fleetwood Mac. Formed in 1967, their first album.

Peter Green's Fleetwood Mac. 4 in the UK charts and brought the band overnight success. They went on to release the no. 1 hit'Albatross' and a series of critically acclaimed albums, with further hit singles including'Black Magic Woman' and'Need Your Love So Bad'. A constant in Fleetwood Mac's frequently changing line-up, Mick Fleetwood took over management of the band two years before they released. Mick Fleetwood now runs the hugely successful Fleetwood's on Front St. This is an opportunity to grab a new, pristine copy of this highly sought-after collectible. It will be a great accompaniment to the forthcoming Volume Two of the history of this great band. A perfect present for yourself or a loved one. The ultimate Fleetwood Mac fan collectible.

The item "LOVE THAT BURNS-VOL. 1-FLEETWOOD MAC-GENESIS PUBLICATIONS-DELUXE-124/350-MINT" is in sale since Thursday, December 21, 2017. This item is in the category "Books\Antiquarian & Collectible".