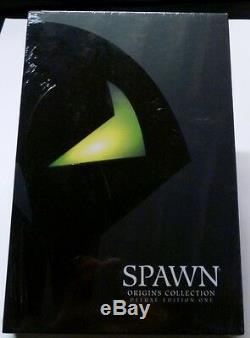 This Slipcase HC book was published in 2010 and was based on the Comic book series "Spawn". This oversized Hardcover Book is brand new, still factory sealed.

Never been read and in mint condition. This book was limited to only 150 copies. Spawn Origins Deluxe Collection Volume 1.

Featuring the stories and artwork (by TODD Mcfarlane himself) that laid the groundwork for the most successful independent comic book ever published, THE Complete Spawn, Vol. 1 Deluxe Hardcover includes the classic SPAWN stories written by Alan Moore, Frank Miller and Grant Morrison in one massive slipcase volume. Al Simmons, formerly one of our governments greatest soldiers, was resurrected from the ashes of his own grave. Reborn as a creature from the depths of Hell, disfigured, homeless and alone, this new warrior know as Spawn now wanders the shadowy alleys of New York City in search of his past life.

Robbed of his memories and identity, this freshly created man whose body is nothing more than scars and torn flesh becomes a protector of the weak, the poor, the downtrodden, and other victims of circumstance. While Spawn tries to piece together his confusing existence, an unwelcome mentor reveals the purpose of his abrupt return to earth. But since this guide comes from the dark side, can he be trusted to tell the truth? And just what is the truth? Find out why Spawn exists, who his real enemies are, and whom he can trust, for in this twisted world of shadow players, nothing is as it appears.

The seller is "amricons" and is located in West Sacramento, CA. This item can be shipped worldwide.