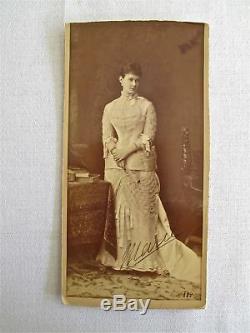 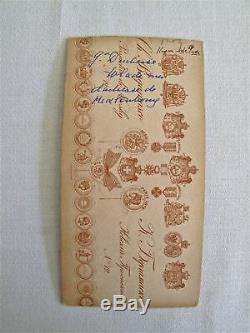 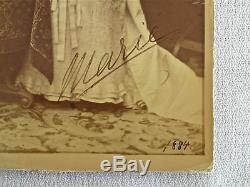 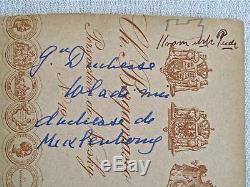 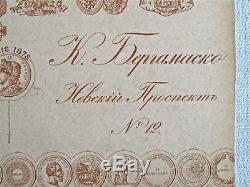 For you fans of the Romanov dynasty and the Imperial Court of the last of the Russian Tsars, here is a very special item. An original, vintage cabinet photo of the Grand Duchesse Maria Pavlovna, also known as Duchesse Marie of Mecklenburg-Schwerin, also "Meichen" or Maria Pavlovna the Elder. The photo is 7 3/4" x 4". The top edge has been trimmed. Her original signature in ink is at the bottom along with the date of 1884. The back of the photo has the name of the photographer and in ink Gd. Duchesse Vladimir duchesse de Mecklenburg. The Duchesse was born Marie Alexandrine Elisabeth Eleonore of Mecklenburg-Schwerin, daughter of Grand Duke Friedrich Franz II of Mecklenburg-Schwerin and Princess Augusta of Reuss-Kostritz. She was born in the Schloss Ludwigslust on May 14, 1854 and she died in exile at her villa in Contrexéville, France on September 6, 1920. The Duchesse married the third son of Alexander II of Russia, Grand Duke Vladimir Alexandrovich of Russia on August 28, 1874. Upon her marriage, she took the name of Maria Pavlovna of Russia and became an Imperial Highness. She was known as being the grandest of the grand duchesses and was a great hostess at their home, the Vladimir Palace on the Palace Embankment on the Neva River.

The Duchesse would always try to outshine the Imperial Court and was in competition with her sister-in-law, the Grand Duchesse Elizabeth Feodorovna of Russia, sister to Alexandra Feodorovna. GD Maria Pavlovna even contemplated with her sons a coup against the Tsar in order to install her own son, Grand Duke Kirill as Regent. The Duchesse was the last of the Romanovs to escape Russia during the revolution, making her way through the Caucacus and through Constantinople on to Venice, then to Switzerland and finally to France where she died at her villa in Contrexéville on September 6, 1920, surrounded by her family.

Of interest to admirers of her fabulous jewelry which was made for her by the likes of Cartier and Fabergé and also presented to her by the Tsar and other members of the Imperial Court is how the jewelry escaped the clutches of the Bolsheviks. Prior to fleeing Russia, she had a friend deposit some of her treasured jewel-incrusted, gold and enameled collection of cigarette cases and cufflinks in cotton pillowcases at the Swedish Embassy in St. The rest of the Duchesse's jewelry also escaped confiscation and looting because according to legend recounted by William Clarke, author of Hidden Treasures of the Romanovs, the British aristocrat and diplomat Albert Henry Stopford, who was a friend of Pavlovna, risked his life to break into her palace, find the jewels and carry them out of Russia under diplomatic immunity in his luggage. One of her famous tiaras is today owned by Queen Elizabeth II of England. At the death of the Duchesse, her famous collection was divided amongst her children.

Grand Duke Boris received the emeralds, Grand Duke Cyril received her pearls, Andrei received the rubies and her only daughter Elena received her diamonds. For a great photo gallery, check out Grand Duke Vladimir on Myspace. FREE LOCAL PICK-UP in Palm Desert, California. Sorry, I hope you understand. I acquired the photo in 2011 from a sale of art and Russian memorabilia from the Palais de Soye in France.

This estate at one point was home to an aristocratic Russian family. The item "RARE SIGNED GRAND DUCHESSE MARIA PAVLOVNA/MECKLENBURG-SCHWERIN PHOTO FROM 1884" is in sale since Thursday, June 16, 2011. This item is in the category "Collectibles\Photographic Images\Vintage & Antique (Pre-1940)\Cabinet Photos". The seller is "mondonostrum" and is located in Palm Desert, California.