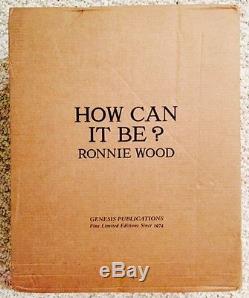 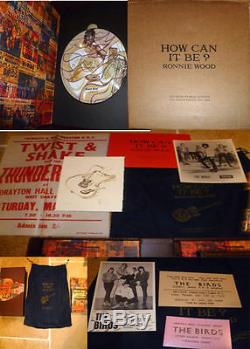 A Rock & Roll Diary. New, Mint, Sealed in Box. SCARCE GENESIS Limited Edition of only 350 individual super deluxe editions issued by Genesis Publications in 2015. In this LEATHERBOUND BOXED DELUXE EDITION of only 350 copies, each book is signed by Ronnie Wood.

Hand-bound in antiqued leather, with gold blocking and page edging, the binding replicates Wood's diary down to its original scuffs and scratches. Loose-leaf facsimile items include posters, nightclub tickets and rare photographs. Within a folding case, Deluxe Copies include an exclusive artist-signed print. Numbered to match your book, this 8in x 6in Giclée is made on deckled edge art paper and is suitable for framing. The 45rpm record features'How Can It Be?

A song written by Wood for the Birds and recorded in 1965. The B-side unveils Ronnie Wood's new specially made recording of the same song. Wood has created the artwork for this 7in picture disc - a cubist-style self-portrait, complete with guitar and 1965 diary. Hand-bound in antiqued leather, with gold blocking and page edging, the binding replicates Wood's original diary down to its scuffs and scratches. Original standard hardback also included within the box and the set comes together in a custom made box with drawstring bag.

Within the book's slipcase a pull-out tray holds a 45rpm record featuring'How Can It Be? The song was one of Ronnie Wood's first compositions, written for the Birds and recorded in 1965. The B-side unveils a new specially made recording of the same song. Wood has created the artwork for the 7 picture disc - a cubist-style self-portrait, complete with guitar and 1965 diary. How Can It Be A Rock & Roll Diary includes rare and unseen photographs taken by Ronnie Wood's friends, family and bandmates.

Colour and black and white shots bring his stories to life, depicting'strange photocalls', road trips and plenty of high-energy performances. Archival images also illustrate events in the diary, from seeing the Stones on TV to filming alongside Marianne Faithfull.

Ronnie Wood:'I was pleasantly surprised to find some of the stuff from the time, that I still cherish the memory of. Historical memorabilia - including newspaper clippings, album artwork, concert posters and contracts - are also reproduced throughout the book, and in facsimile as additional loose-leaf items. Ronnie Wood's original handwritten diary is shared here for the first time, giving unique insight into his life and the period.

Ten years before he joined the Rolling Stones, Ronnie Wood's musical apprenticeship with the Birds catapulted him onto the stage of swinging London's music scene, aged just 17. Featuring a cast of characters including Jeff Beck, Pete Townshend, Eric Clapton, Keith Moon, Marianne Faithfull and many more, the story of Ronnie's adventures was handwritten in his 1965 diary.

Inspired by its discovery 50 years later, Ronnie Wood presents his journal for the first time, with an introduction by Charlie Watts and much more in this signed book and record set. Ronnie Wood:'I suppose my own private world is in the diary. In this book, Ronnie Wood shares a series of original artworks inspired by the content of his diary. Friends and musicians such as The Who are featured, as are early musical influences such as Howlin' Wolf.

Others bring to life memories of everyday life: loading a van with his bandmates, or pushing a stalled car home. Drawings of the guitars and amps Wood used embellish his words - with new anecdotes often personally reproduced in Wood's own calligraphy. The item "RONNIE WOOD-HOW CAN IT BE-GENESIS PUBLICATIONS-DELUXE No.

122-SOLD OUT- SIGNED" is in sale since Wednesday, October 26, 2016. This item is in the category "Entertainment Memorabilia\Music Memorabilia\Rock & Pop\Artists R\Rolling Stones\Other Rolling Stones Mem". The seller is "bhermanmd" and is located in Philadelphia, Pennsylvania.