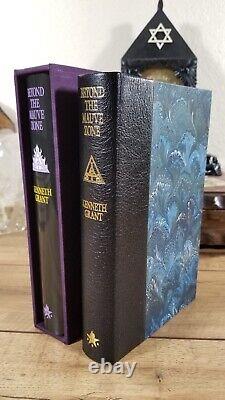 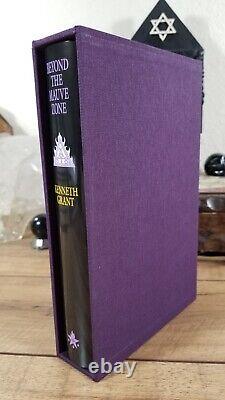 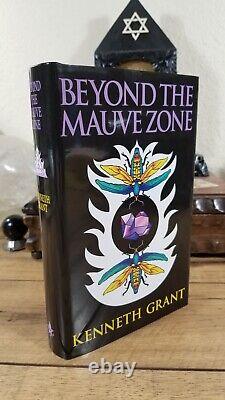 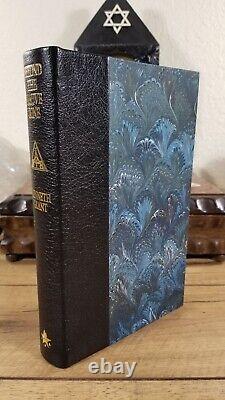 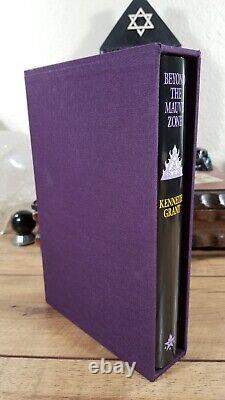 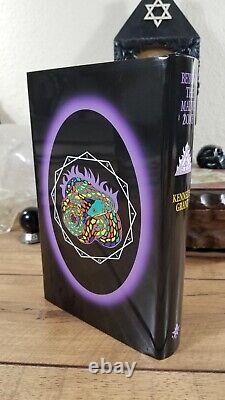 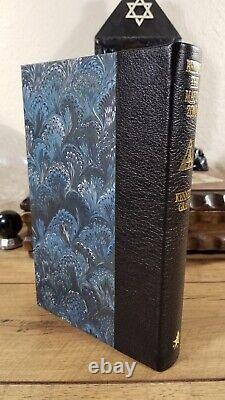 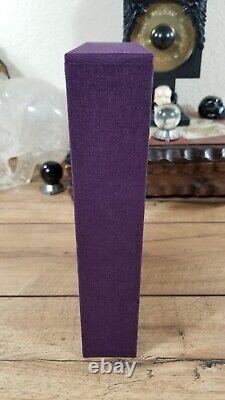 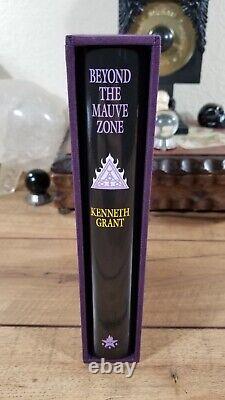 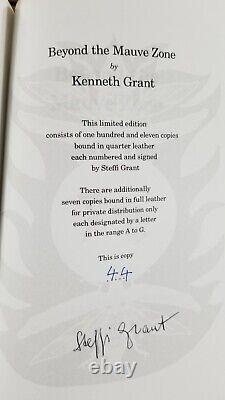 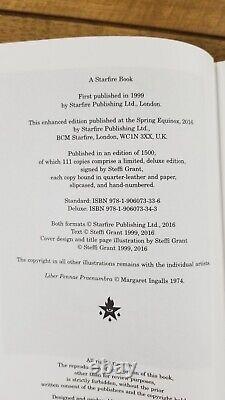 Books have their own destiny. PACKAGED VERY WELL IN BOXES, BUBBLE WRAPPED. PLEASE NOTE: Only the book & slipcase are being offered - the background items seen in the pictures do not come with the book. Please see the pictures concerning condition before purchasing. (Deluxe Edition) BEYOND THE MAUVE ZONE by Kenneth Grant --- (Published by Starfire Publishing in 2016). Limited to 111 copies worldwide - Signed by Steffi Grant - Kenneth Grant's wife and life long magickal partner - her artwork is presented on the dust jacket and in the book plates.

Oblique to the paths that give on to other dimensions, and beyond them, there lies a region which the author has termed the Mauve Zone. Mystics, magicians, sorcerers, artists of many kinds have - over the centuries - skirted it, stumbled upon it, and fled from it. Very few have penetrated beyond it and survived, or cared to leave any record of the experience.

Those that did, have had to present their accounts as fiction, or discover a new means of communication - via weird art, symbols, hieroglyphics, signs which fellow pilgrims alone might recognise. Access to the Mauve Zone has been facilitated in more recent times by the use of magical systems developed by occultists such as Austin Osman Spare and Aleister Crowley, both of whom established contact with inter-dimensional entities possessed of trans-human knowledge and power.

Both systems involve the use of sexual magick to open hidden gates that have remained sealed for centuries. The present book contains references to these systems, as well as to the explorative work of skilled contemporary Adepts such as Michael Bertiaux, Margaret Ingalls (Nema), Jeffrey and Ruth Evans, and the Patriarch of the Ecclesia Gnostica Alba, Zivorad Mihaljovic, which places them in the forefront of present-day practitioners.

There is also included a detailed account of the Cosmic Energy in humanity, known anciently as the Fire Snake, the Kundalini of Oriental arcane tradition which it is necessary to awaken if access to the Mauve Zone, and beyond, is to be achieved successfully. The account is based upon a rare Tantric work which provides veritable keys to the Mauve Zone and to the magico-mystical formulae designed to surpass it. Beyond the Mauve Zone paves the way for the final volume, The Ninth Arch, in a series comprising three Typhonian Trilogies. Occult Witchcraft Magic Sorcery Necromancy Voodoo.

KENNETH GRANT : A pioneer in creative occultism. Kenneth Grant is a well-known occultist. Having been a student of Aleister Crowley , Kenneth Grant, with his wife, Steffi Grant, went on to create what is known today as the Typhonian Tradition.

He is mostly known from his Typhonian Trilogies books, consisting of these nine volumes in this order. Aleister Crowley and the Hidden God. Outside the Circles of Time.

In these books you will find everything from Sex Magick , Qabala , Gematria , to alien praeter-intelligences who have established communication with magicians, sorcerers, and workers of arcane practices. One of the most popular titles in the Typhonian Trilogies is Nightside of Eden , dealing with the reverse, dark side, of the Tree of Life and its demonic denizens. ALEISTER CROWLEY : The Great Beast, no introduction really needed here. Aleister Crowley is known by occultists and non-occultists. He wrote numerous books on Magick which are still being republished today.

Magick deals with spiritual forces within yourself and within the universe. Historically, witchcraft was seen as a diabolical pact with the Devil. We've all heard of the witches riding to the sabbats on their broomsticks after anointing themselves with magical oils where they would dance and fornicate with the Devil and his homeboys. Today, however, witchcraft is not seen in the same light.

Can incorporate some dark spiritual aspects, such as the modern. However, deals with pagan gods and goddesses and has a creed of "harming none" and is basically nature worship and spell-casting, and herbal work. The books we offer on sorcery you'll find are of a darker nature. Where darker aspects of occultism are employed in a folk-magic style. Like in traditional witchcraft, herbs, oils, bones, dirt, colors, sigils and darker spirits are employed for tasks. Necromancy uses various magical tools and techniques to speak with, communicate with, and call forth the dead.

Necromancers usually employ human skulls, bones, and other items of the grave in their dark arts. Books of ritual magic instruction are usually termed grimoires. These grimoires have been around for centuries. Some teach you how to call up spirits of certain natures, cast spells, curses, make pacts with demons, and much more.

Modern grimoires are what you will mainly find we offer. We live in the modern age, therefore, we try to offer grimoires more in sync with today's modern witch, magician, sorcerer or necromancer. The books we offer on voodoo are for the more serious practitioner. Our books on voudou, voudoun, santeria, palo mayombe are written by initiated students. Such as, Michael Bertiaux, David Beth. Nicholaj de Mattos Frisvold, Dr. These books are not geared toward teaching you "voodoo spells" but rather they focus on deep, African-derived spiritual systems. Be sure to keep checking back as we add new books constantly. We offer very select titles for serious occult students and practitioners. Your patronage is very appreciated! This item is in the category "Books & Magazines\Antiquarian & Collectible". The seller is "desert_owl_occult" and is located in this country: US.